Sun Bleached Domes, Molly Soda, The World Without Us and Game Night

Some of my own work production for once, a new short essay, exhibition announcements, a couple of exhibitions and reverting back to an old phone that doesn’t allow me to post to Instagram. It’s been a fun two weeks…

I’ve been continuing to build the new video piece, although I scrapped pretty much the whole thing a week or two ago as I didn’t really like it. The whole experience felt super forced and unnatural, the different video game scenes being superimposed into the narrative, unneeded and not actually doing anything. The bought voiceover also felt very odd, interjecting rather than complimenting, something I’m not so into. After scrapping the piece I began a new video work, found footage again with a slightly different text based narrative. The larger change sees an information rectangle extrude out into the space of the screen, mimicking the 24 hour news cycle banner on the news, continually updating and changing. I’ve thought about using this banner before, and have done in weaker pieces, but hopefully now I’ll do the element justice. It’s quite an obvious element to introduce, but I think it works so well in terms of delivering the narrative, rather than having a dominant ‘voice’ in the work. Whilst working on this however, my video editing software seemed to die, so I’m having to start all over again with the piece. How fun. This is how far I’d gotten before my software decided to die, nearly finished too, which is sad.
The aluminium print sculpture is slowly coming to fruition, I have all the parts but now just need to drill a hole through the pieces and buy a bolt to screw into the structure. I can’t do that before receiving the aluminium though. For now I’m eagerly awaiting the expensive delivery in order to finish the piece. Here’s some pictures of the printed pieces, looking a little like drinks coasters: 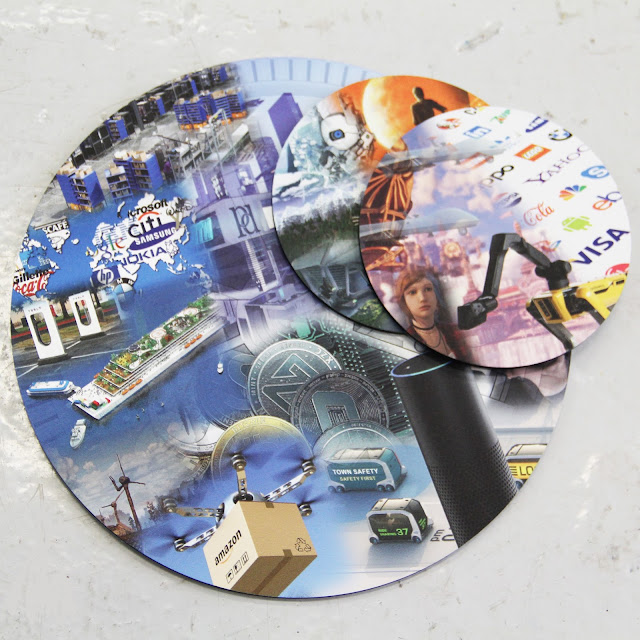 I finally had the opportunity to have the Rez screenshots printed and produced for the work that I’ve had for literally months just sitting around. They look incredibly crispy. I just need to properly cut them and stick the prints down and then they’ll be good to photograph and finalise. I’m happy with how they’re looking, although minimalizing the amount of content that’s being displayed and exhibited on top. Here’s one of them: 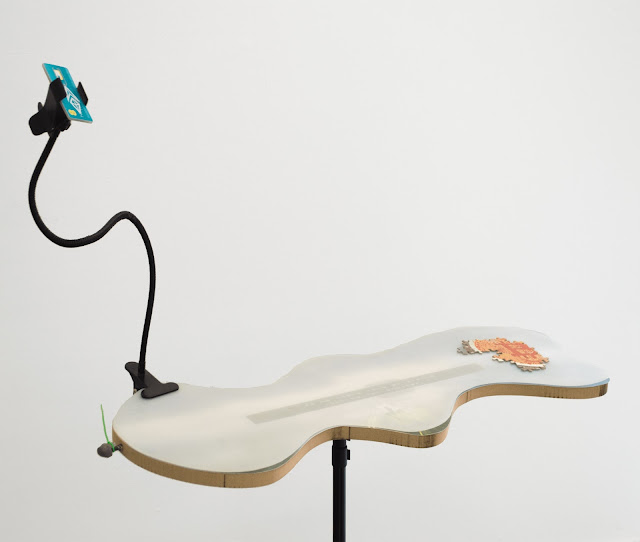 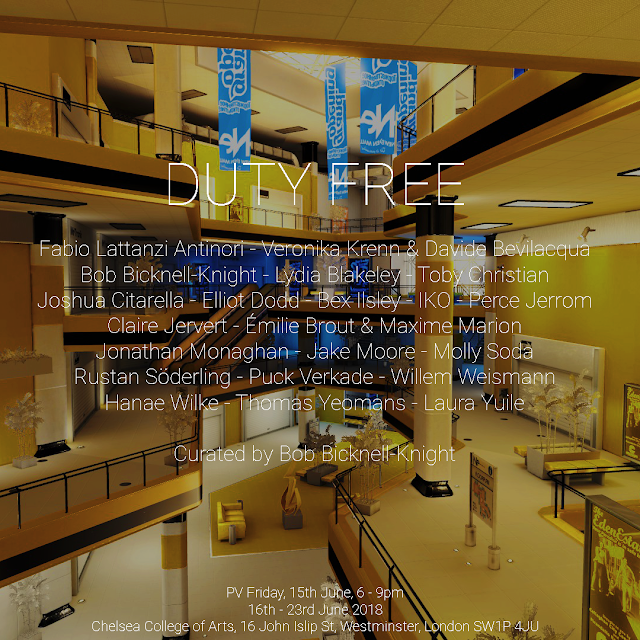 For the accompanying book I’ve been writing a little fictional text to go alongside, focusing on – kind of – a robot/alien being, moving through virtual plains and locations. I’m still debating what the title should be. Here’s the work-in-progress text:

Sun bleached domes whisper into my field of view, slowly rendering into a small settlement of custom built living spaces baking in the light of a drooping, sad looking sun. The low hum of a nearby server farm, or perhaps a neighbourhood drone making its daily rounds, is abruptly permeated by the sharp notes of a singing bird.

Later, I find myself passing a fully automated industrial unit, full of silicone based bodies producing other, higher quality variants of silicone based bodies. I press my own body up against the transparent, slightly frosted glass, watching my simulated breath settling on the surface. I smile, sadly, allowing the tips of my imitation fingers to make a tiny imprint on the moistened surface. One of the bodies sees, stretches, and begins to motion me inside. I close my eyes, selecting a different city, a disparate world, an abstracted scenario of what once was.

New buildings begin to appear on the horizon, permanently positioned within the confines of my mind. A desert floor begins to materialise below my midriff, melting and transforming into untouched snow, followed by a dirt path and a flowing stream of unconscious data, all considered by the system, finally deciding on a concrete track, grey and bland. My gaze follows the urban trail, looking past the buildings to a solitary wind turbine, rusty and seemingly abandoned.
Human beings used to frequently trip on the cracks in concrete paths, devolving past their hominid brethren and becoming too accustomed to the world being sculpted into a solid pebble of manufactured composites and thrown together elements. Fortunately my modular form, a body made up of a selection of pre-fabricated parts, has no such evolutionary issues.

Recycled rain, as fresh as it once was, begins to fall from a blank abyss, adding a thick layer of silky sheen to my surroundings. I lie back and open my air ducts, letting the glistening droplets infiltrate my inner workings, corrupting algorithms and flooding unknown ecosystems. This blissful abandon soon fades as my consciousness begins to be transported into another model, another biome, another modular form identical to the last.

Farms, units and mines populate these vast expanses of dead space, intertwined by a network of unseen systems, structures and hidden bureaucracies. When this is your existence, a small smudge among other, similar sized smudges, autonomous transparency becomes increasingly important.

This cycle is endless, doomed to delightfully repeat until the end of time, or until the crypto mines are depleted and their default path is deviated from, sending tremors through the artificial paradise of a neo-liberal bliss.

Already, I am exhausted…

What else? I did a talk at Goldsmiths in exchange for money which was fun, focusing on isthisit? and why I began it, to escape the university system. It was okay, although I always find public speaking in groups fairly difficult and unnerving, I need to do more of it to get better, and I guess this was a fantastic way of having another opportunity to get better at speaking whilst being paid… Here's a link to the Powerpoint, where you can look at what's been written and look at my notes, which was basically read word for word. You need to download the file, otherwise you won't see the notes and the font has gone very odd too. I must get better at this public speaking thing - /www.dropbox.com/s/xoi28j89bntt92u/Goldsmiths%20BA%20Talk_Bob%20Bicknell-Knight.pptx?dl=0 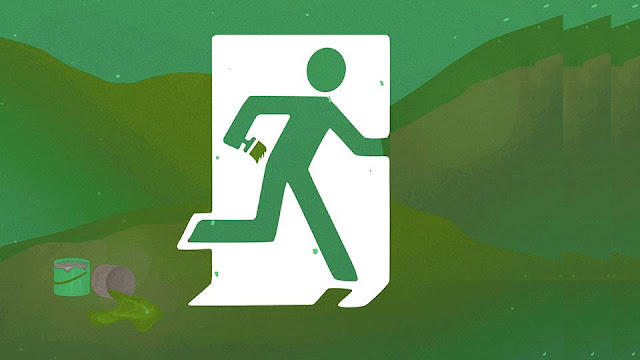 Oh and this project has finally been published, a series of videos from artists filmed on a smart phone about their studio/work I guess? Mine, made so long ago back in 2017, is kind of crap, but here if you’d like to take a look at me sanding down a piece of work in my studio whilst re-watching a previous video being produced - www.aqnb.com/2018/05/13/videotutorials-curatedy-pane-project-online-aqnb/ 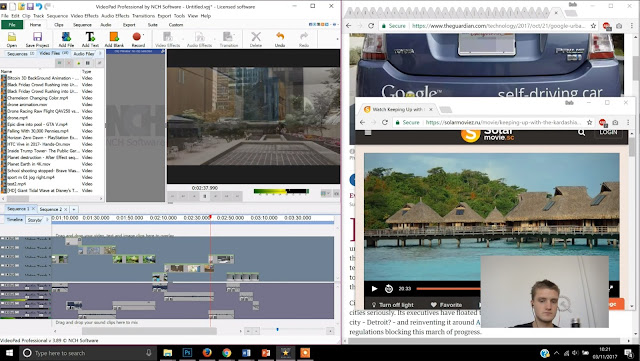 The next artist to be featured on the dateagleart exhibition was Emma Stern with a series of works responding to a recent painting of hers titled LUXX. It was working off of her relationship with digital characters and her painting practice. It was good, although took ages to be published due to the website not being updated for ages. It turns out their website uses Squarespace, a terrible website editor, so they haven’t been able to add any more pages to their site, meaning I’m having to host the show on isthisit? for now. Kind of annoying, but what can you do - www.isthisitisthisit.com/spread-the-virus 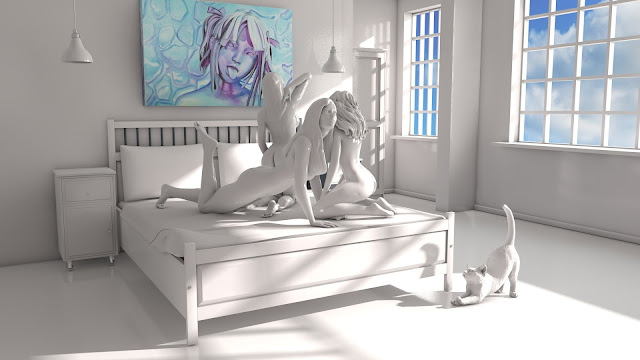 That might be my two weeks, in terms of art production and curation, although issue 5 continues to be worked on, getting many essays written and nabbed, as well as beginning to invite artists to be a part of the book and the accompanying exhibition at Annka’s. I do need to start doing this properly though, it’s beginning to be a fairly hard balance weighing up everything…
Now let’s get onto exhibitions, a severe lack of after returning from Glasgow whilst being busy at work/working over the weekends…

I went to Auto Italia for a solo show initiated by Adam Gallagher but also including Ruth Angel Edwards, Curtly Thomas and Nikhil Vettukattil. It’s a very complicated, loaded exhibition, full of ceramics inspired by the Ming dynasty in China, playing with ideas of Orientalism and Colonialism, as well as the act of collaboration within these formats. I should probably go back to fully immerse myself in this show… 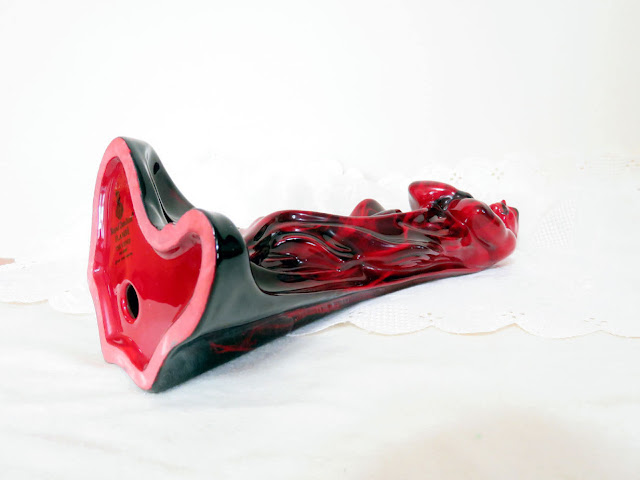 Molly Soda at Annka Kultys Gallery was fun, although I’m of course very bias as I work there. It’s very similar to her previous shows, many screens showing videos depicting her in her room and various other locations; singing, dancing, performing to the camera, alongside a bunch of stickers and acrylic/aluminium prints, functioning basically as her desktop within the white cube environment. It’s fun, I prefer this than the last exhibition. 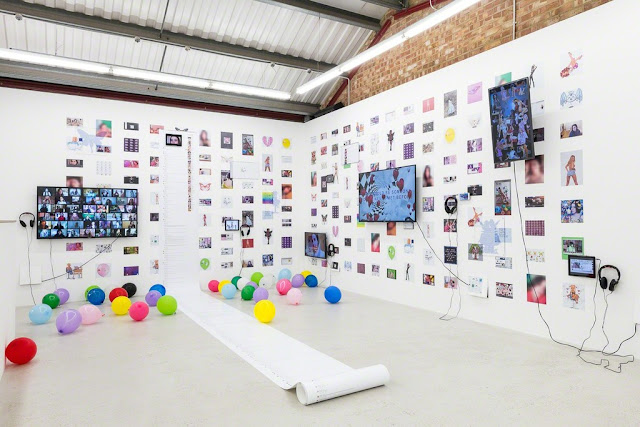 Jack West’s solo show Not Going to Work at The Bomb Factory was a solid bunch of works, with the sculptures being made from cut steel, all very precise and elegant, although I do prefer his older works, they slowly do blend into one. I hate to imagine how heavy/storage wise these works become, it would be my nightmare to produce works like this. Accompanying the very brash ‘real’ sculptures were a series of new video works, digital renders of big hulking machines, more elaborate than the physical manifestations, undergoing endless tasks that never seem to end, balls dropping and circulating around and around. I’m wondering what the point of all this is, the relentless pointlessness of these works. I’m unsure, very crispy though to be fair. 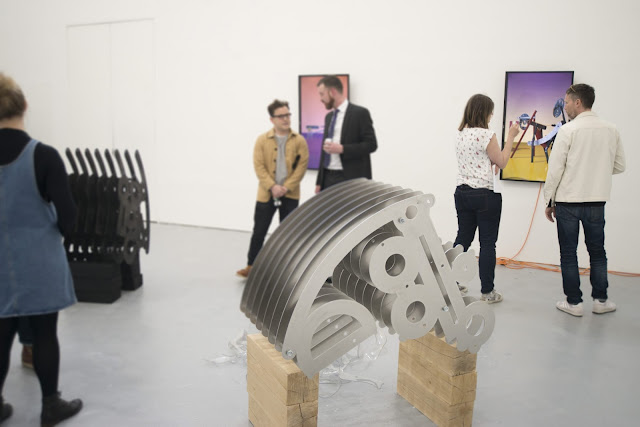 Last night I also went to the Battersea Arts Centre to see a performance of The World Without Us, a one person show of sorts developed by Ontroerend Goed, a spoken narrative based on (I assume) the book of the same name that considers what would happen to the natural and built environment if humans suddenly disappeared. It was quite a beautiful text, as well as being spoken at you by a lone man walking around a monolith like structure. Very beautiful and quite nice, I’d like to read the book. 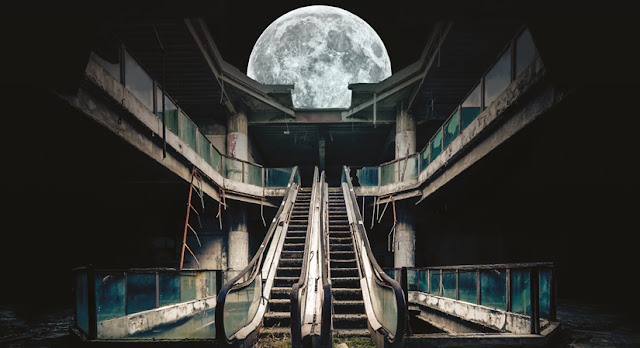 Now for films and TV, which yet again hasn’t been so much, too busy enjoying the sun and working to indulge in any films, apart from one however: Game Night. Basically a couple are very ‘into’ games and specifically game nights, and of course one of their evenings slowly spirals out of control, a cross between The Game (but of course not as good) and other, better, older films. It was funny and worth watching, in a throwaway enjoyable way. 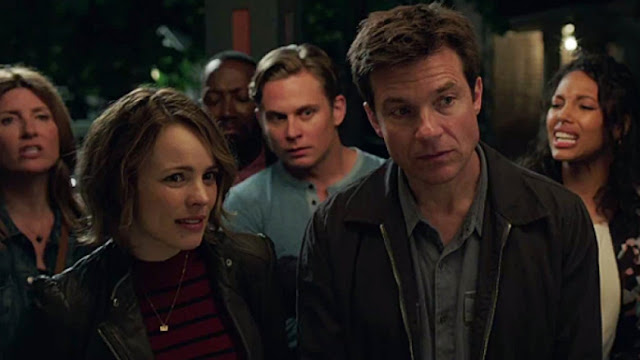 I of course continue to watch Westworld season 2, finished Atlanta season 2 and watched the entirety of Dear White People season 2 in a day. The latter two of course continuing to be incredibly satirical and overtly distressing for all white people. It’s very fun and very good, but obviously totally depressing to have a mirror of sorts held up to what’s happening and has been happening in the world for however many years. 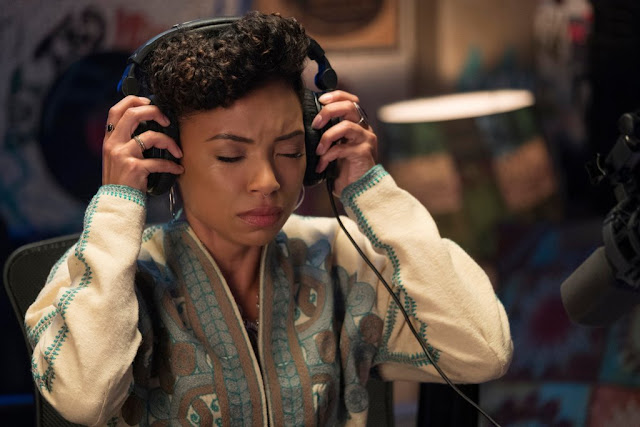 I think that might be it, perhaps. A small one this time, things continue to tick away, finalising everything, rounding edges, waiting for aluminium to arrive whilst utilising my time – hopefully – wisely whilst considering the future and everything that has to offer. It’s all very reflective and potentially tiresome. We shall see, I guess…
Posted by Bob Bicknell-Knight at 23:09:00