On Thursday I began to think more about the meaning behind the work that I'm making, considering what all the different parts are saying about the overall concept. I began by thinking about how the work is coming out of the wall, and how this is forced, as opposed to how the sculpture goes in on itself, which is natural. This reflects how, in life, I make a conscious effort to move forward, to make work and do things. It also looks at how, occasionally, I slow down and stop, moving back into myself.

This made me think about how, if I keep touching and moving the wax as it dries, it doesn't dip back into itself. This adds to the idea of moving forward, and how if I'm constantly doing things I won't dip back into myself. I can stop the work from dipping into itself, and at the same time I can stop myself from slowing down and keeping things as they are/were. This is interesting to me and gave me an idea to juxtapose a dipped piece with a non-dipped piece, showing the similarities and differences, two different futures in a sense, one where I move forward with my life and one where I go backwards into myself.

On Friday I went to Butley to work again, I started by taking the concrete heads that I had poured on Wednesday out of their shells. I think this was the last batch of heads that I have to make, as next week they're all being transported to somewhere in Norfolk where they will be displayed on a beach. I then moved the cement mixer outside, so that Laurence could distort more of the heads again. I also managed to take a picture of one of the heads after being in the mixer for around 20 minutes, having had the majority of its features removed. 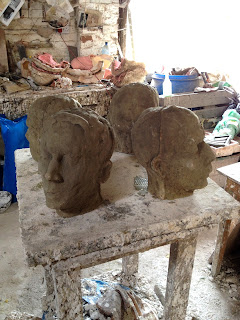 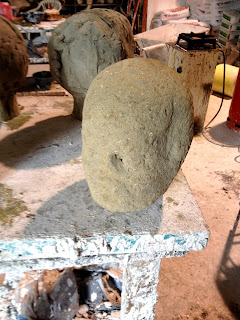 I then continued to make my two part mould, this entailed pouring the rubber, which was an exciting material to use. When I had finally made the complete thing I tried it out using plaster, it worked well, but unfortunately the wax piece that I had used to make the mould wasn't that great in the first place. So the sculpture that was created was good, but not as good as some of my work in wax. So I think I'm not going to make another mould until I make a really good wax piece, as the mould making process does take a fair amount of time and money. 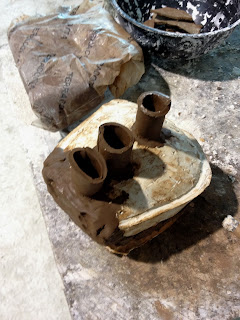 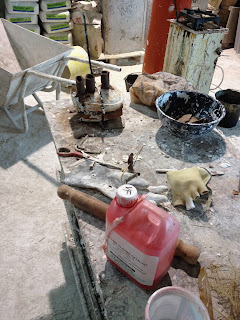 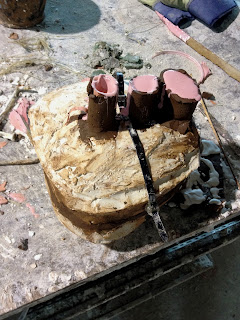 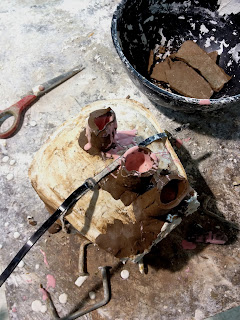 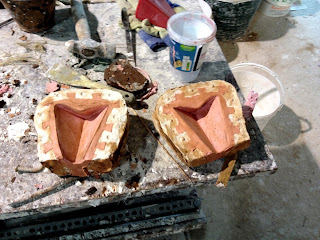 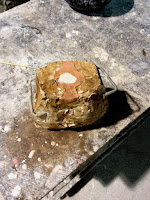 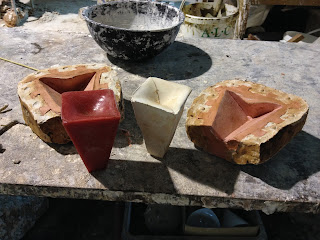 After making the small plaster sculpture however, I do like how fast the material dries, as well as the finish that is created, so maybe with more experimentation, plaster will be the main material used in this project, with wax simply being the starting point.

I also had to do lots of skip work, which was obviously boring, but at the same time it's nice to actually effect a space in one way or another. 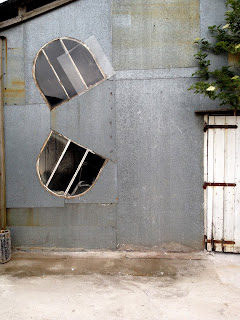 Today I've been thinking more about what the work means, as well as thinking about the scale of the sculptures.

Towards the end of the day I played a few interesting and mind bending games. One was called Antichamber, which is a first person puzzle game of sorts, that's accompanied by intense visuals. It was an intriguing experience, that encouraged you to think using a different part of your brain. The other game that I played was also a puzzle game, centred around the idea of choice within videogames. It was called The Stanley Parable. It had a really unique concept, with so many different endings. I thoroughly enjoyed playing both games.

In the next few days I want to think more about the concept, as well as finally finding some wood to make a mould for a wax piece.