Over the weekend I managed to finally finish my research paper, it was really interesting to look into the two artists, one I was relatively familiar with, whilst the other I was fairly new to. I'm still yet to add images of the artwork that I talk about, but I will do that later. It's important to do this as sometimes the tutors don't know the artist that you have chosen to write about. This is the full first draft.

This essay is going to look at artists that make aesthetic choices to entice the viewer to look into the deeper meaning within their work. I will also explore how I seek to accomplish this in my own work. The two artists that I have chosen to write this essay about are Kazimir Malevich and Daniel Buren. Both have made minimalistic work in the past that appears to have no meaning beyond the fact that it is interesting to look at.  However this is not the case.

It is impossible to talk about the work of Malevich without first talking about Suprematism, an art movement that he founded in 1913[i], which sought to give over artworks to the highest point of expression, whilst simultaneously ignoring the familiar appearance of objects[ii]. When he created his Black Square[iii] there was no figurative basis there, at the time it was considered to be a desert[iv], with no meaning or aesthetics to speak of. What critics didn't realise is that it's simplistic beauty was the start of a movement that utilised basic geometric shapes[v]  and conformed to a rigid set of rules[vi].

So one could argue that Malevich himself made no real conscious aesthetic choices whilst creating his work, he simply allowed his feelings and emotions to take over, whilst using a small selection of shapes and colours to represent his thoughts. The aesthetic decisions that happened before creating the work is another story however, when he and his fellow artists devised the rules of Suprematism they made the use of simple shapes a key factor, so that the work could be solely about the expression of feelings. But it could also be said that they chose those shapes in the beginning because of aesthetics, so that  whatever they went on to create it was guaranteed to be beautiful and interesting to look at.

In my own work I have gone through a process similar to this, devising a set of rules which intertwines aesthetics with meaning. An example of this would be how every sculpture that I make in this unit has to be the same size. This simple rule enables me to affect each piece of wood in a different way, whilst keeping the aesthetics for each piece largely the same. It also represents how each day starts off the same, but the outcome is affected by your own actions. Unlike Malevich, this is only for one specific piece of work, rather than ten plus years of work.
The second artist that I looked at was Daniel Buren, whose majority of work is centred around the way space can be used, appropriated, and revealed in its social and physical nature[vii]. Interestingly a lot of Buren's work is constrained to a set of rules, not unlike Malevich's, where he uses stripes which are always 8.7cm wide[viii] to completely take over a space. He accomplished this in an exhibition that I went to see[ix] where he transformed one room by adding a huge mirror spanning the entire length of the back wall, effectively doubling the gallery space and the amount of work that he had created, making it impossible to look anywhere in the room and not see an 8.7cm wide stripe.

So in terms of aesthetics, a lot of Buren's work is similar, and what really changes is where the work is being exhibited, thus completely changing the meaning behind it. For example, one of his first large scale pieces was for an exhibition at the Solomon R. Guggenheim Museum[x]. The piece of work was a canvas 20 meters high by 10 meters wide, with alternating white and blue stripes. The only real aesthetic difference this had to his previous work was the scale of the piece. In actuality though, this pieces purpose was to reverse the hierarchic relationship inferred by the Guggenheim's architecture[xi]. Due to its position (dividing the central space into two parts) within the space, visitors would begin revolving around it as soon as they went up the ramp. The piece itself became a sculpture within the space, as the work changed as you walked around it. In this respect, both the Guggenheim and the painting worked together as two parts to become one whole. Without the architecture of the space, the painting would have stayed a painting.

A constant feature of Buren's is to make the viewer move around the work, rather than adopting a fixed point. He also tries to get you to visually perceive and therefore understand the work with as little outside information as possible[xii]. This is something that I try to attempt in my own work, getting the viewer to understand what I'm trying to communicate to them by simply walking around a piece. This is especially true for this current project, where I'm trying to convey and evoke emotions by affecting wood in different ways. I want the viewer to understand which emotions I'm trying to communicate by observing and touching the sculptures, rather than just giving them a piece of paper with the information all laid out for them to see. This philosophy reminds me of Trisha Donnelly and how none of her work is accompanied by any labels[xiii].

Through researching this essay I have learnt that artists don't always make decisions on how their work looks in conjuncture with what their work is about, and vice versa. I have also found that some artists, like the two I have looked into, set rules within their work so that the fundamental aesthetics will always be the same, whilst the meaning will change indefinitely from piece to piece. I hope to continue to strive to make art work that combines aesthetics with meaning, allowing the viewer to understand what it's all about without having to consult a piece of paper.
[i] http://www.tate.org.uk/learn/online-resources/glossary/s/suprematism
Kasimir Malevich, The Non - Objective World, 1959
[ii] http://www.theartstory.org/movement-suprematism.htm
[iii] http://www.tate.org.uk/context-comment/articles/five-ways-look-Malevich-Black-Square
[iv] Kasimir Malewitsch, Malewitsch, 1981
[v] http://en.wikipedia.org/wiki/Suprematism
[vi] http://www.britannica.com/EBchecked/topic/574754/Suprematism
[vii] http://www.lissongallery.com/artists/daniel-buren
[viii] http://en.wikipedia.org/wiki/Daniel_Buren
[ix] http://danielburen.kamelmennour.com/
[x] http://www.guggenheim.org/new-york/education/school-educator-programs/teacher-resources/arts-curriculum-online?view=item&catid=721&id=38
[xi] Guy Lelong, Daniel Buren, 2002

Today I began to design and create the books that I'm making to accompany my piece in the end of year exhibition. These will help to inform the viewer of what the work is about, as well as becoming a piece of art within themselves. I managed to design two of the four books today, one called Emotions, and the other named Feelings. After creating a pair of books for the end of the last unit, I feel that I have learnt from many of the mistakes I made, which will be useful when I come to printing the books. 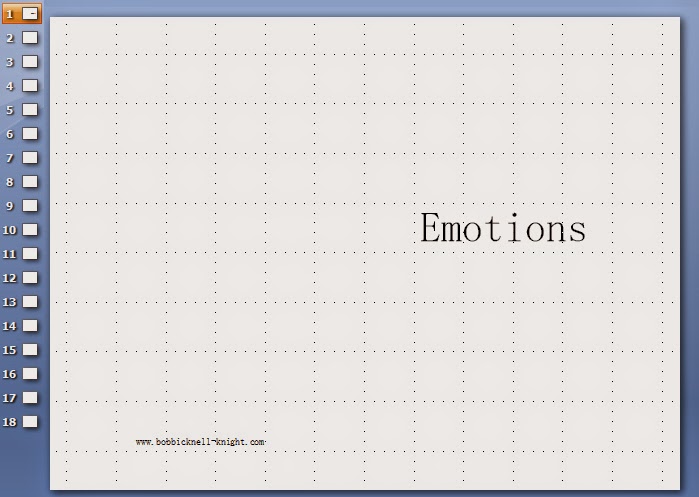 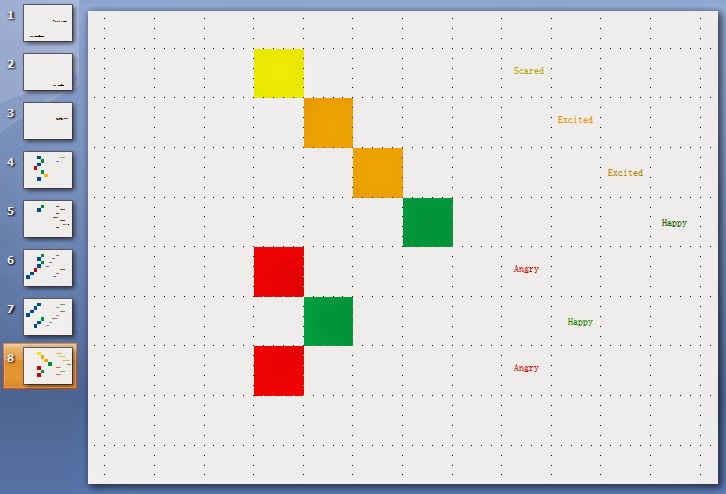 I also took part in an installation workshop, looking at how we (the students) are going to put up our show. This was useful, as I mocked up a to scale replica of my final piece, something which I hadn't done before. It enabled me to see what I needed to change about the layout as well as what worked well. Through this process I decided to only make 30 sculptures, instead of 31. This helps me by leaving more room between the top of the board and the bottom, stopping the work from being squeezed into a small space. 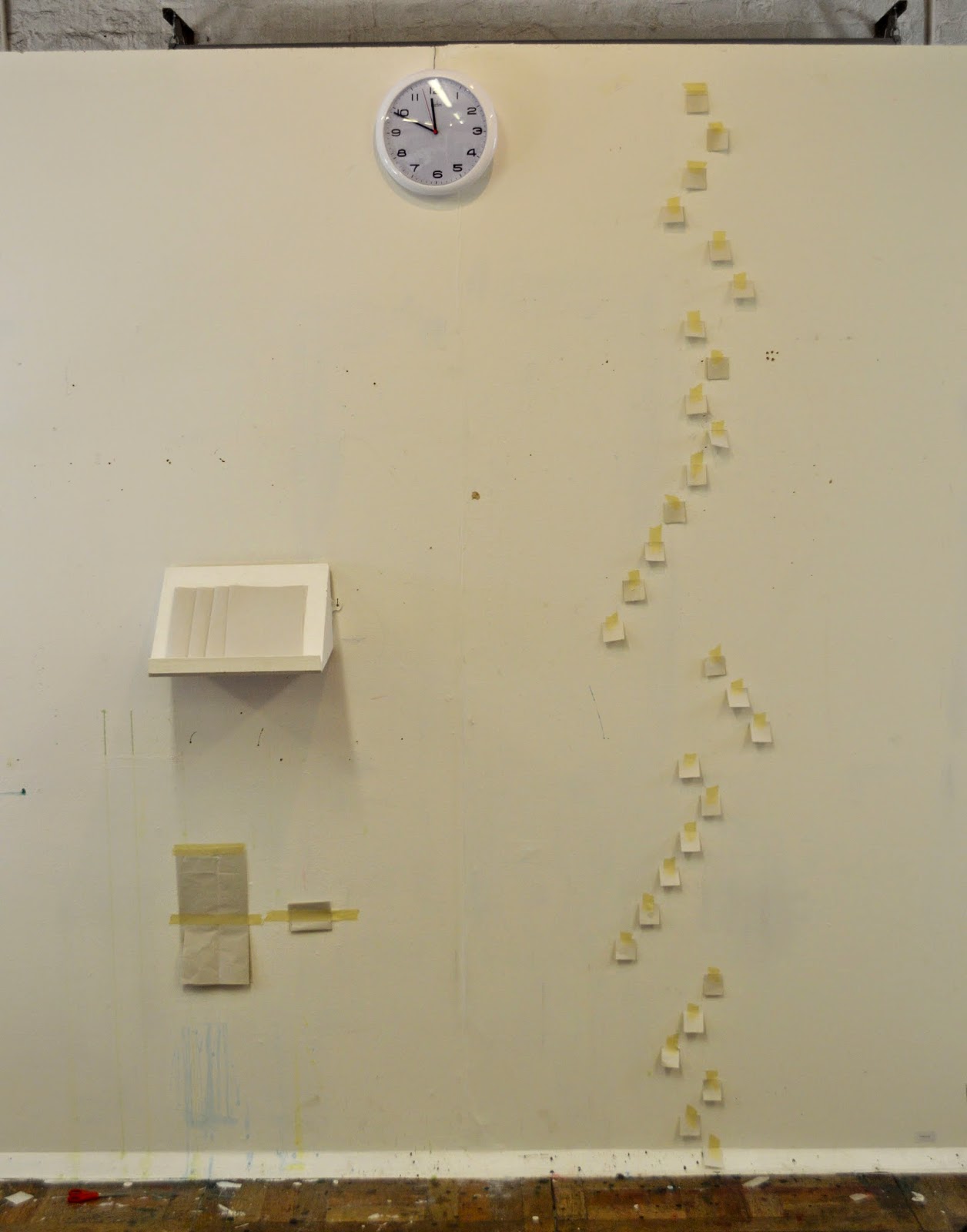 I hope to finish the designs of the two other books, as well as the leaflet, by the end of the week, which will then give me ample time to create the final piece.
Posted by Bob Bicknell-Knight at 22:46:00