Over the weekend I finished the first draft of my evaluation.  I feel that it hits all the key points of the project well, but needs to flow better, rather than having paragraphs of different thoughts stuck in at random points. This is the first draft:

I began the confirmatory stage with an idea that slowly developed and changed throughout the project, slowly being formed into a final exhibition piece. I came up with the concept of conveying different people's views about what happens when you die, through affecting contrasting materials in a range of ways. However I quickly dropped this idea as it almost instantly became too big a subject to delve into for the three months I had to do it in. I also wanted to make the project more personal to me, so I decided to try and convey my own emotions through transforming wood (a material I had prior knowledge about) in different ways.

I started by researching different emotions, and then created an Excel chart to document my own. I did this so that I would have primary research about emotions, and when I started to make the sculptures I would be able to portray my own feelings through the work. After experimenting with changing wood in a variety of ways I eventually chose to only use sandpaper. I did this to build up a stronger concept behind the work, the sanding down of the wood representing how life blends into one journey, where there are only a few significant points that stand out. This can be seen in my final piece, with the majority of the sculptures being subtle, and the bolder ones standing out from the crowd.

As the project continued I experimented a lot with colour, but I eventually decided against using it, as the grain of the wood was severely distorted after painting the sculpture. I was disappointed that I couldn't use colour for the final piece, but the grain is an important part of the aesthetic and meaning behind the work so I didn't want to lose it. Taking away the layers of the wood to reveal the grain inside reflects how you open up yourself to be examined by people you're close to. It's also what I'm doing by displaying my own emotions in the sculptures.

Throughout the unit I went to a number of galleries and did a lot of research about the relationship between art and emotion. Through this I discovered a lot of important information to do with symmetry and the use of artwork descriptions. Through doing this, and experimenting with many sanding techniques, I also decided that touching the work is an important part of the work.
I then started to think about how I would display the work, and eventually came to the decision to display a month of emotions, with the different sculptures attached to the wall, slowly moving down as the days go on, eventually filling up 245cm of wall. With this layout, you can't quite discern where the work starts and stops, this is reflecting how your emotions are constantly changing, and that there is no start or end to them.

As the project continued I put together a range of books to go alongside the work, looking at the concepts behind the final piece as well as being artworks themselves. These were complicated to make, but the eventual result was worth the time and effort. Talking with my peers about the content, and whether or not they understood the work was a critical part of the book making process, as well as the project as a whole.

I also put together a pamphlet of all my previous work from the foundation, to be displayed beside my work at the exhibition. This was so viewers of my work could gain a better understanding of my thinking and making process.

Towards the end of the project I decided to make five sculptures (displayed outside) to be companion pieces to the small sculptures that are inside the exhibition space. After thinking about where these sculptures should be placed, I decided to put them where I had felt each of the emotions being conveyed in the different pieces. This was a breakthrough moment, as up to this point I was just going to have these pieces in a random space, with no meaning tied to it.

The making of the final sculptures went relatively well, apart from having to re-make a few of the sculptures that weren't as aesthetically pleasing as they could be. If I had access to a disc sander and band saw the process would have been simpler. I chose to use pine wood, as it's easy to sand and a material I had a lot of.

Putting up the work was a relatively smooth process, using glue to attach the pieces to the wall and placing the sculptures in the ground using metal spikes.

Today I started writing the small essay to go in the third book, explaining what the work means. I initially envisioned it to have a narrative, but it slowly turned into a book of facts, where each page tells you a key part of the meaning behind the work. I'm not sure whether this is a positive or a negative development, but I need to think about it quite quickly. So that I can make changes if necessary. It was also suggested that instead of talking about what the project means, I could have quotes from other artists who have made work centred around emotions, and what it all means to them. If I were to do this I would need to do some research into a range of different artists. Tomorrow I'm going to consider each option and choose the one that I want to take forward. This is the beginning of my short essay:

This book hopes to look into the meanings behind "Emotion" the sculptures, from the obvious to the unknowable.

Each sculpture represents a day of my life. And for each day I felt a different emotion, which was visualised through sanding the wood. There are 30 sculptures within the main exhibition, depicting a month of my emotions.

The five sculptures that are displayed within Norfolk and Suffolk portray the main emotions that people feel, and are placed in locations where I have felt those emotions in the past.

The sanding process symbolises how life blends into one long journey, where there are only a few significant points that stand out. The layout of the work reflects something similar to this, how ones emotions are constantly changing, that there is no start or end to the process.

Each sculpture is sanded with different tools. The change of equipment represents whether I was hiding my true emotions on a given day.  As the tools I used to affect the wood got more complex, the feeling starts to become hidden, moving further away from using a piece of sandpaper. 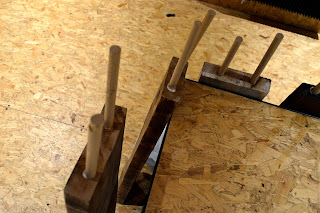 Tomorrow I intend to place the pieces and photograph them to put in one of the books. So on Wednesday I will be printing off the book along with the maps to be given out during the exhibition.

I'm also going to London for the weekend, so I need to completely finish the whole project by Saturday morning. I hope to achieve this goal.
Posted by Bob Bicknell-Knight at 21:33:00